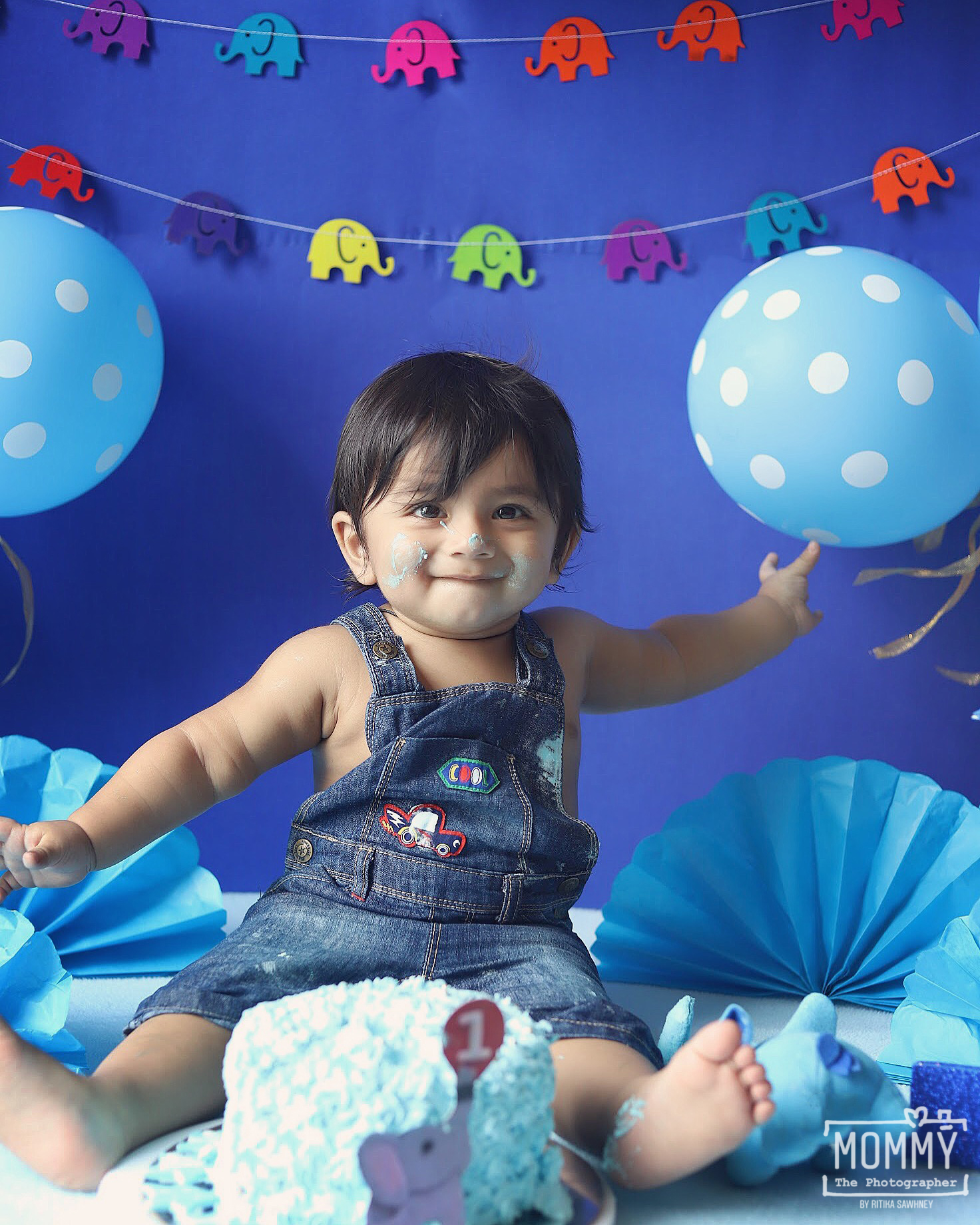 
Hi I am Ritika Sawhney – One of the Top rated Baby photographers in Mohali - Punjab.

This Blog is about Kabir’s cake smash photography session and family portrait which I had done indoor and outdoor on the occasion of his 1st Birthday.

Duration- it was a 3 hrs. photoshoot

Kabir, our 1 year old charming baby boy was all set for his cake smash session on his birthday with that adorable smile on. I couldn’t resist myself to cuddle him every time as he was a chubby cute little fellow that you could see in his pictures too.

Because I was informed that Kabir’s favourite toy is his blue colour elephant and he loves it unconditionally, I planned to incorporate the elephant in the cake smash theme as well.

And guess what, Kabir was super happy to see these elephants all around him.

We had a fun session with him happily playing with the props and smashing the cake like a pro.

Sangeeta Kabir’s mum was a gem of a person and his father was curious to know how is it going to go J Well, he was the happiest person on earth when he saw his baby boy having so much fun while smashing the cake.

Both the parents kept on encouraging his boy to smash the cake a little more and made him laugh out loud by singing his favorite rhymes. It was an adorable family, who put lots of efforts to make it a complete success.

Because Kabir’s favourite toy was an elephant, I used some colourful hangings on the backdrop with elephant shape cuttings to give it a fun look.
Also, I asked my baker to place an elephant holding a balloon on the cake as well. She did a pretty good job with that.
I had used blue colours for the theme for two reasons, one is Kabir’s favourite toy was a blue colour elephant and other was he being a boy, I used blue. I made some handmade pom pom to fill in the floor area and placed some white and blue polka dot balloons around the backdrop.

I started the photo session with individual clicks of our adorable baby Kabir without the cake so that he gets comfortable and settles down with that theme.

A few minutes later Kabir was dressed up for his cake smash session.

I have realised that babies being topless for their session are much happier smashing the cake rather than covering them from head to toe.
Therefore you could see Kabir only with his shorts on, in the pictures.

After the cake smash session got over, we went outdoor to start with the family photoshoot. Started with some basic poses and then some shots with the props. It was fun clicking them. 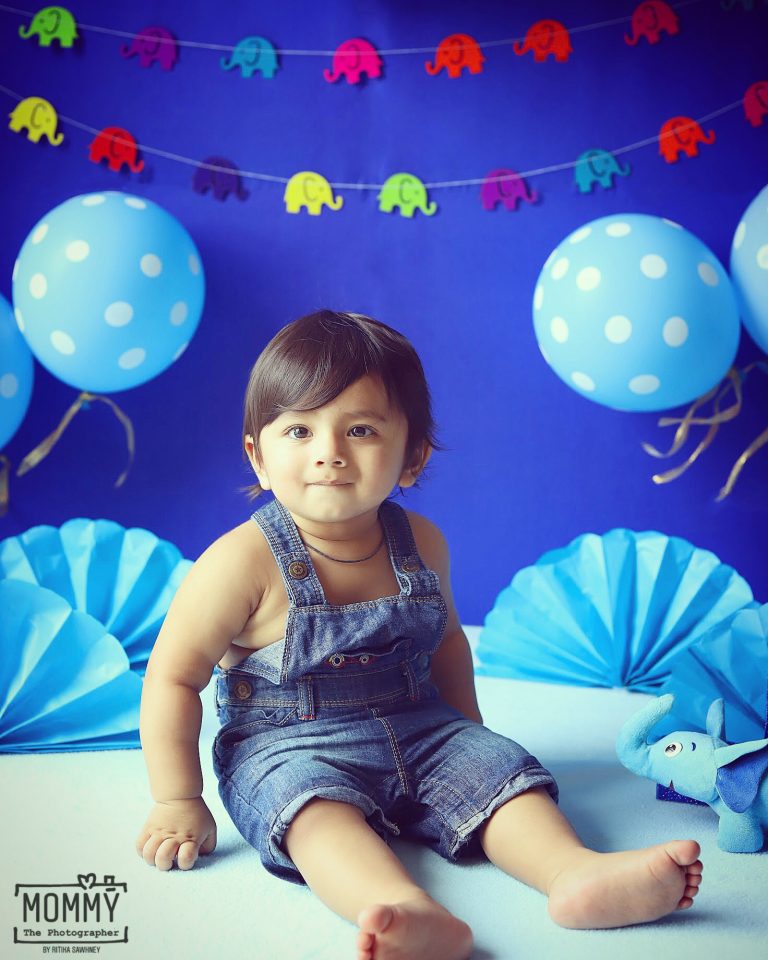 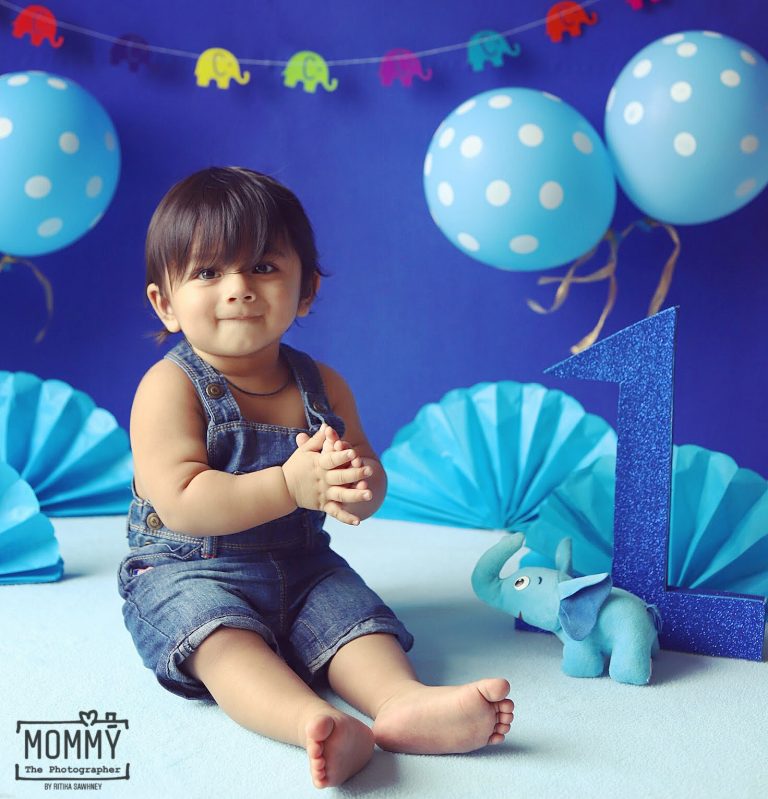 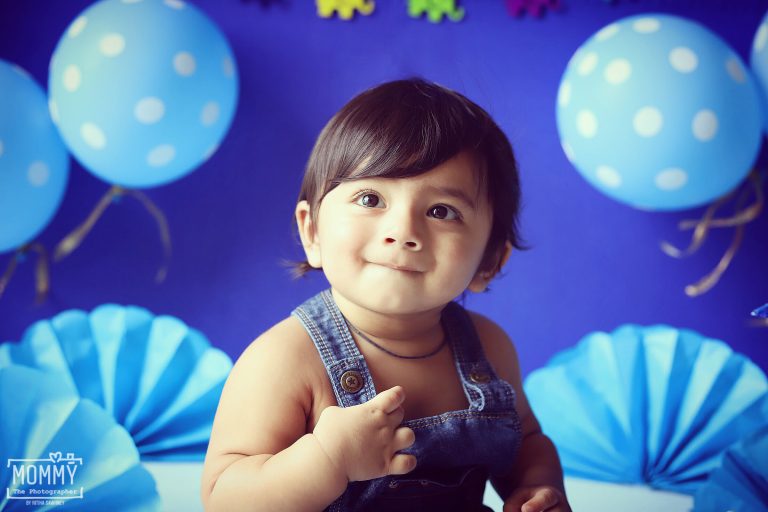 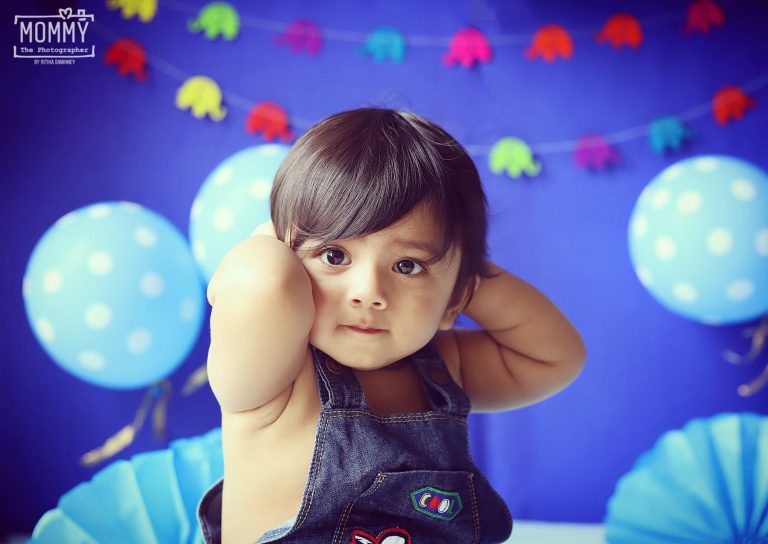 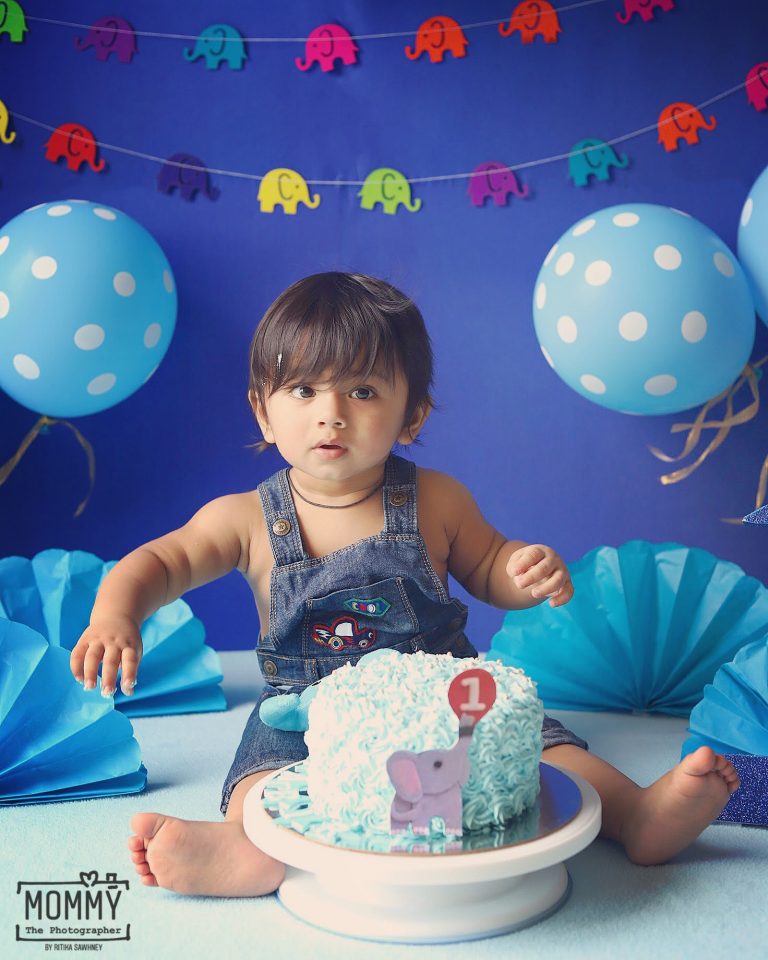 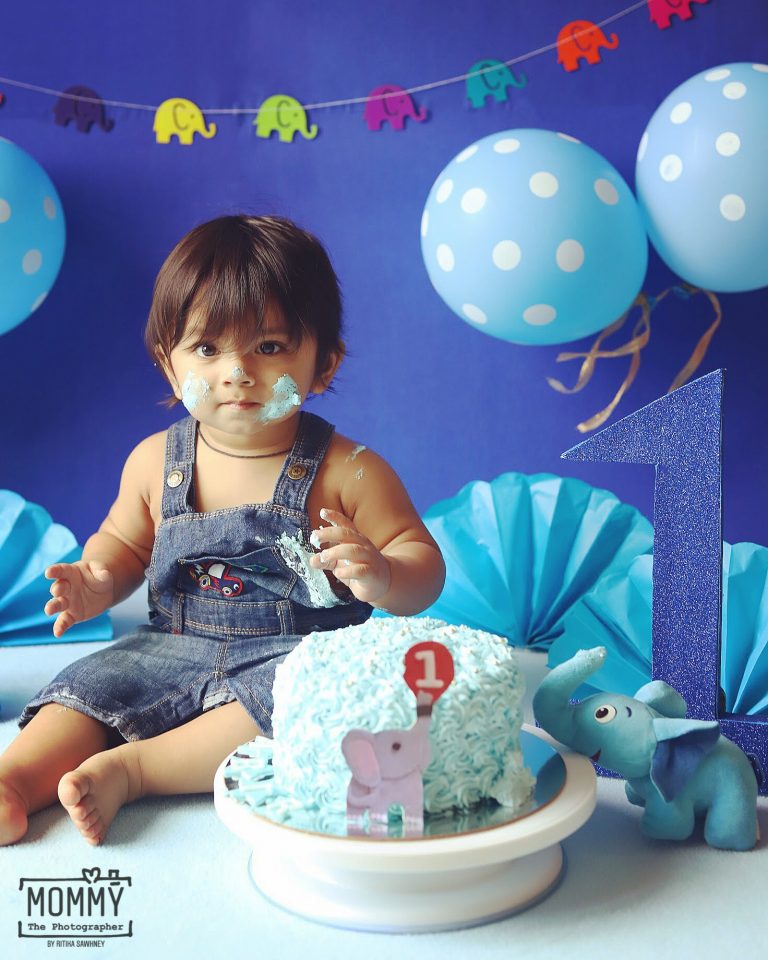 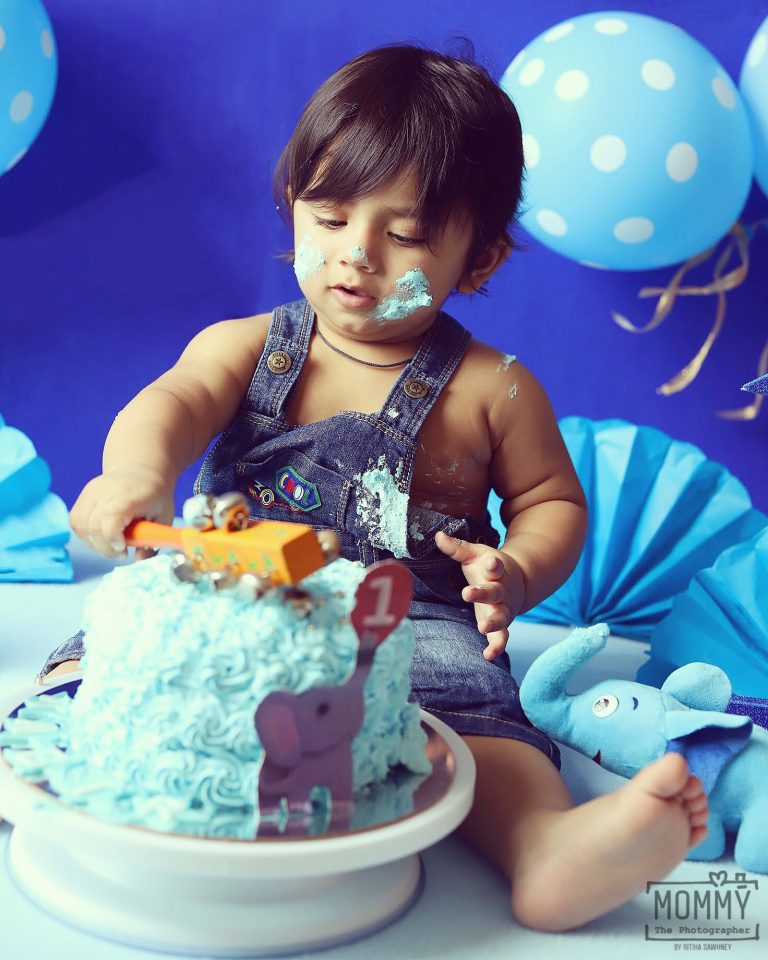 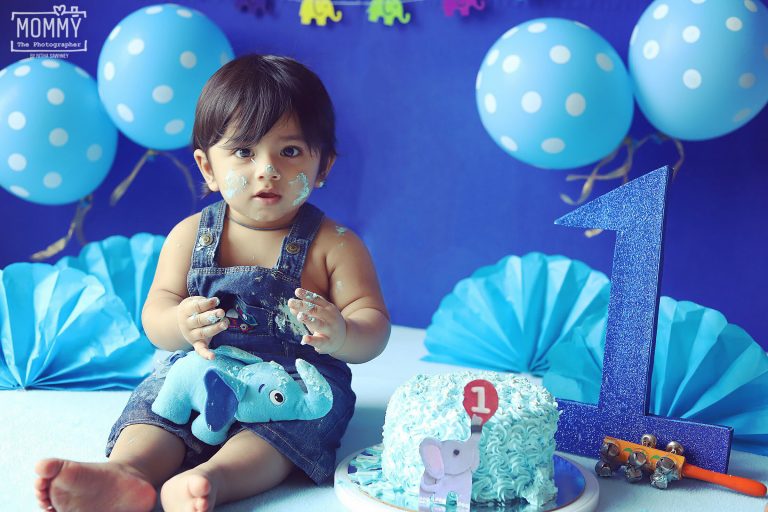 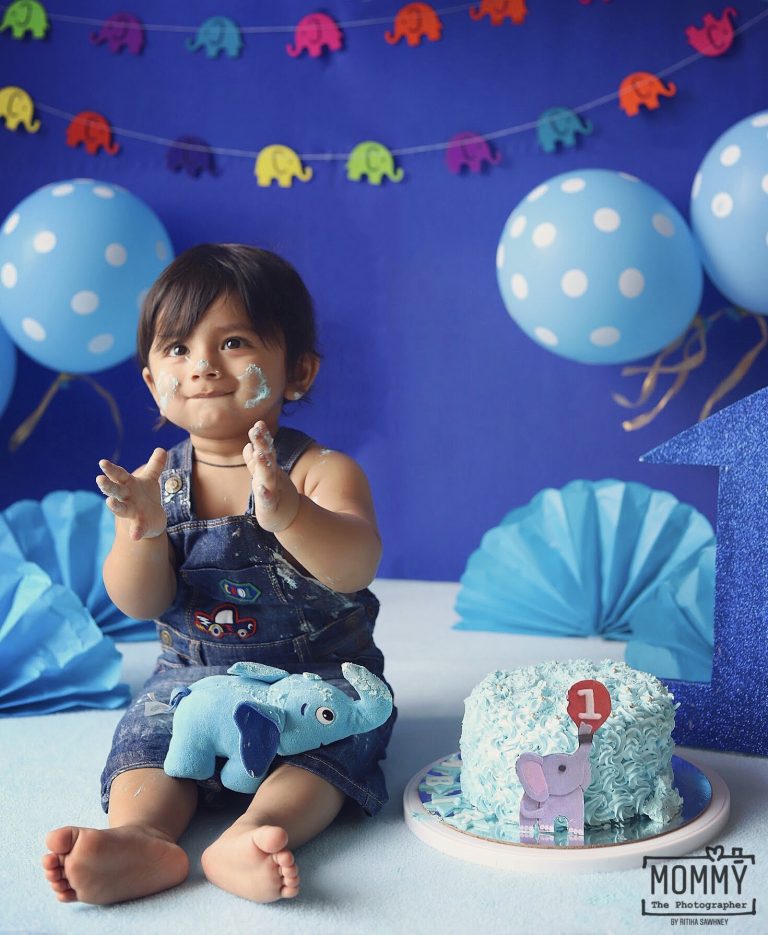 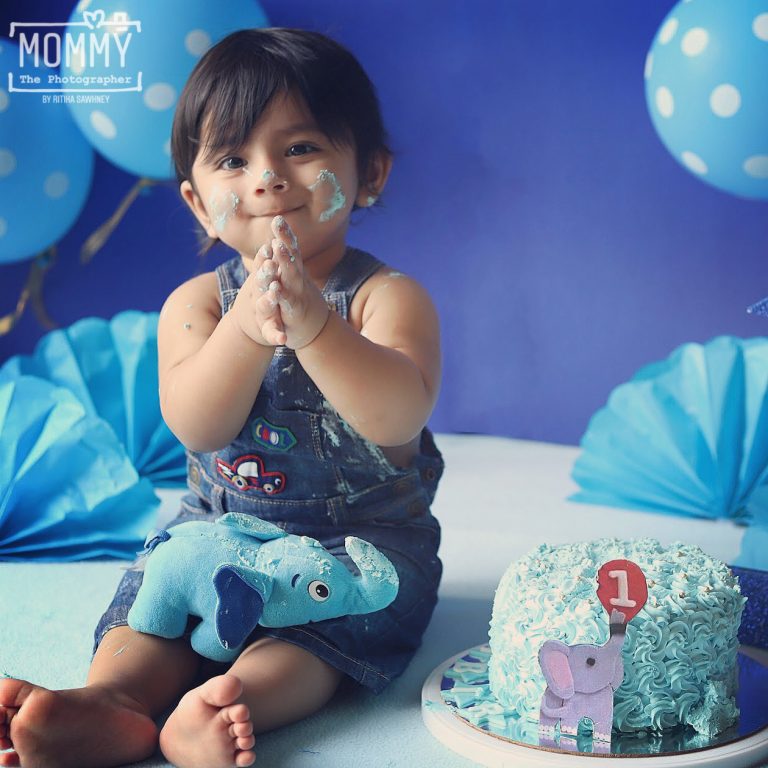 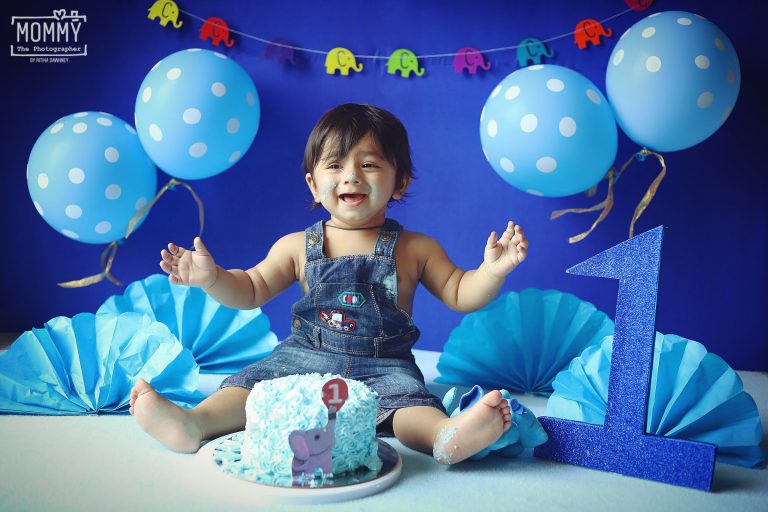 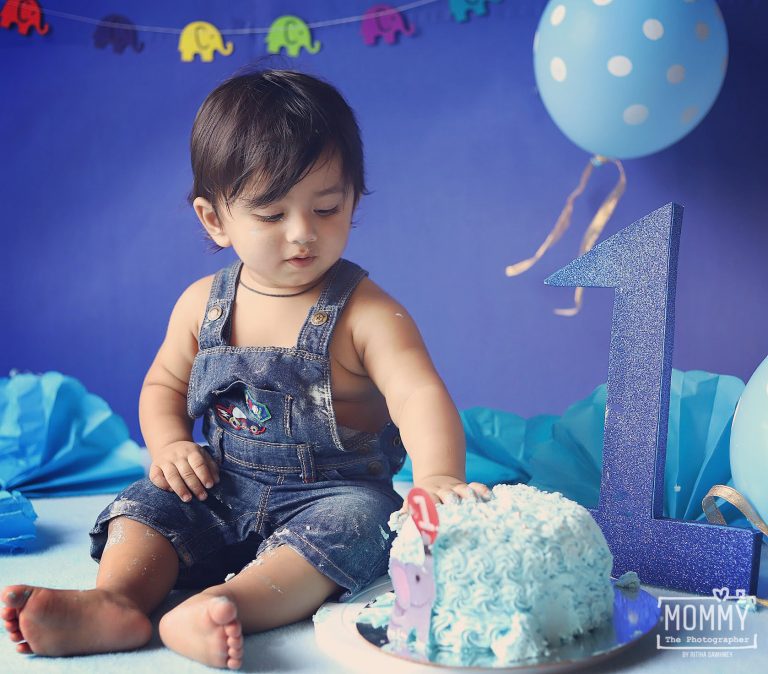 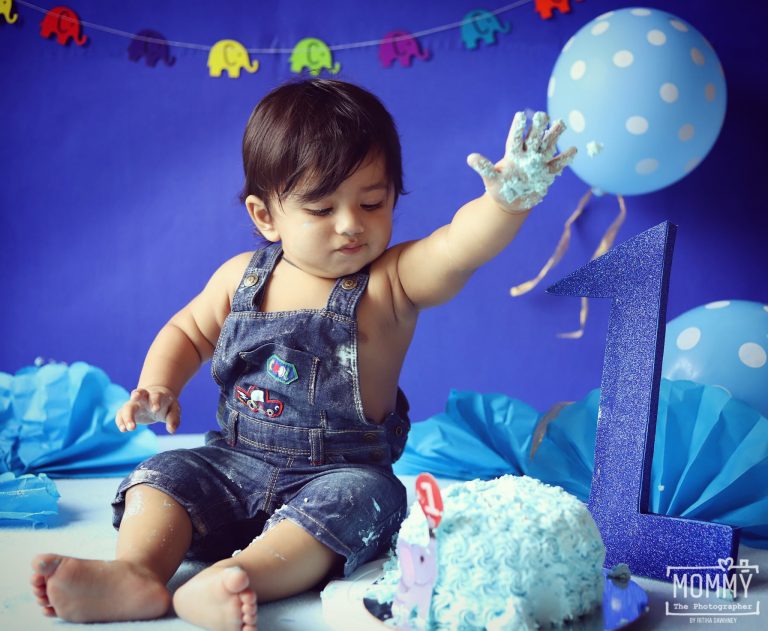 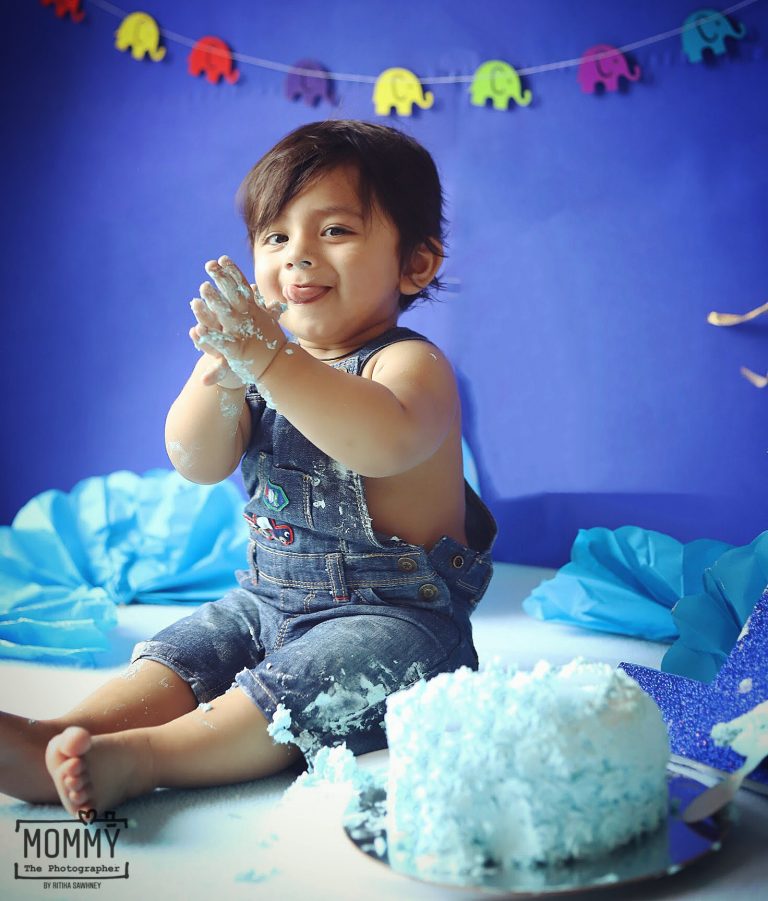 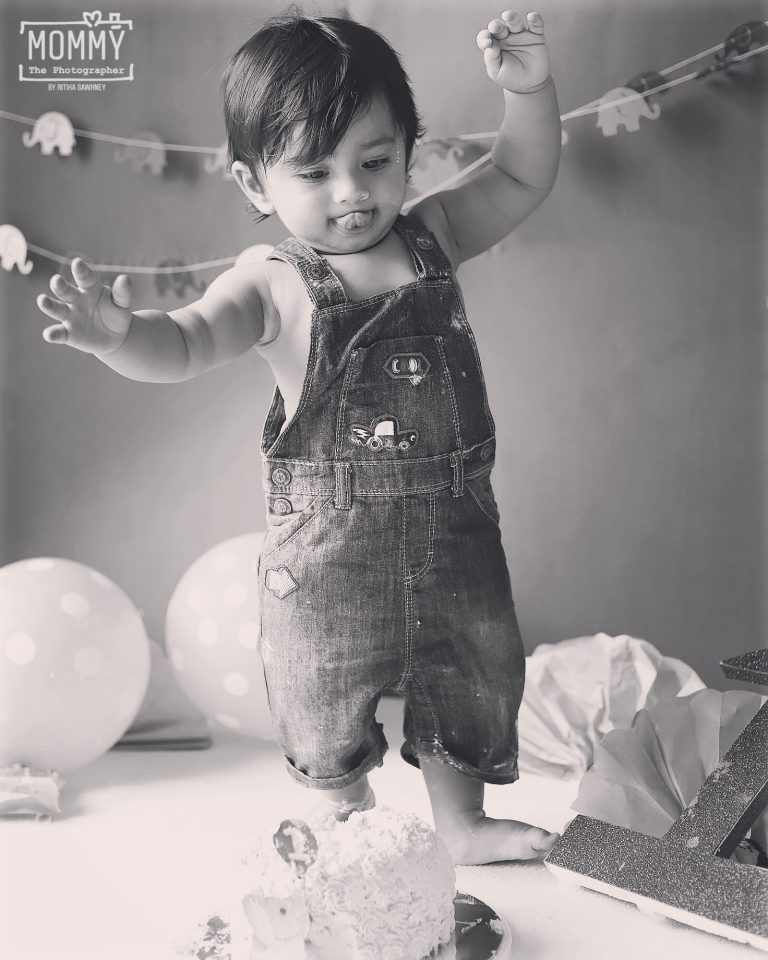 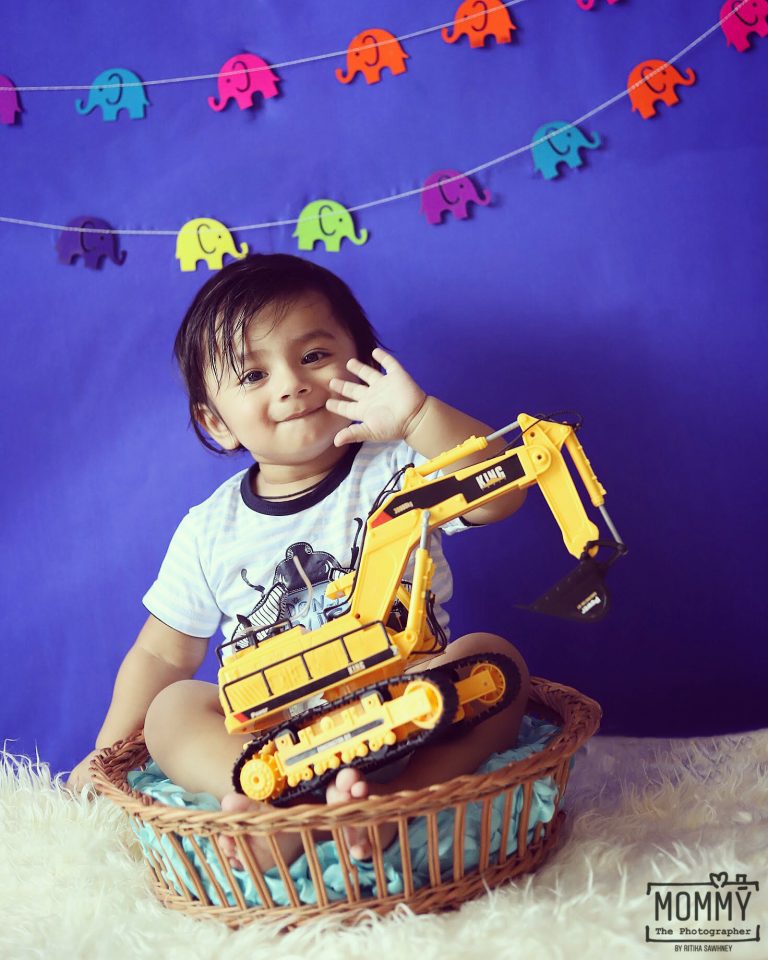 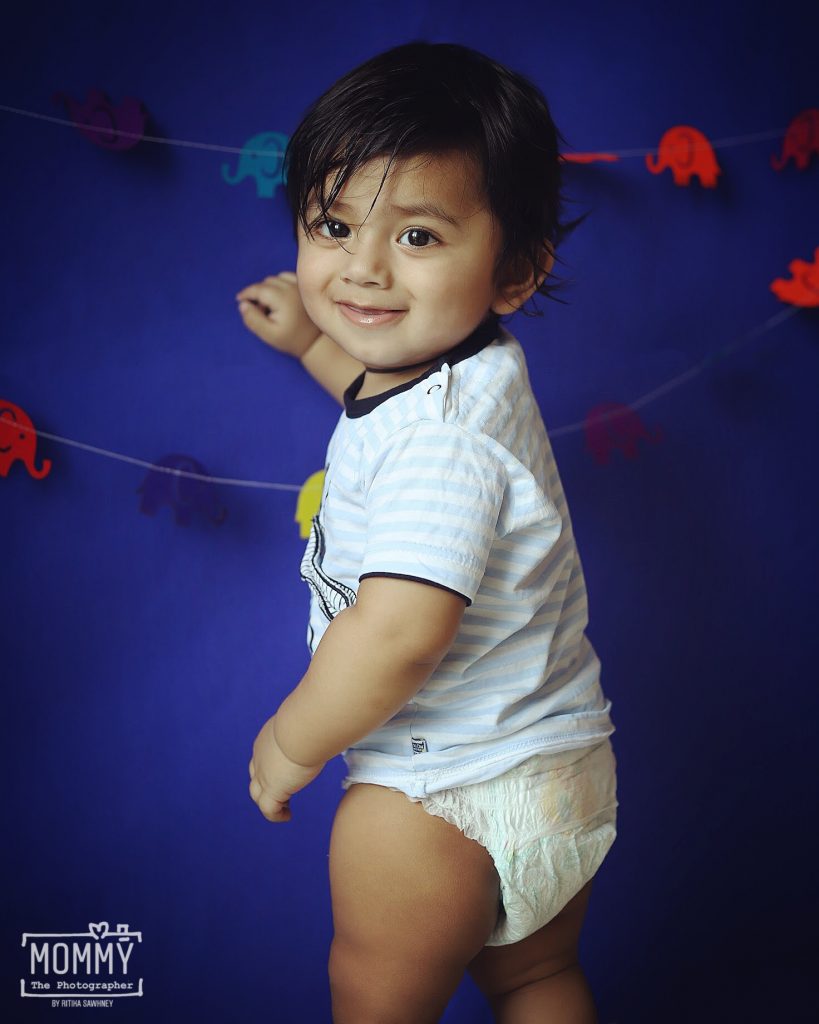 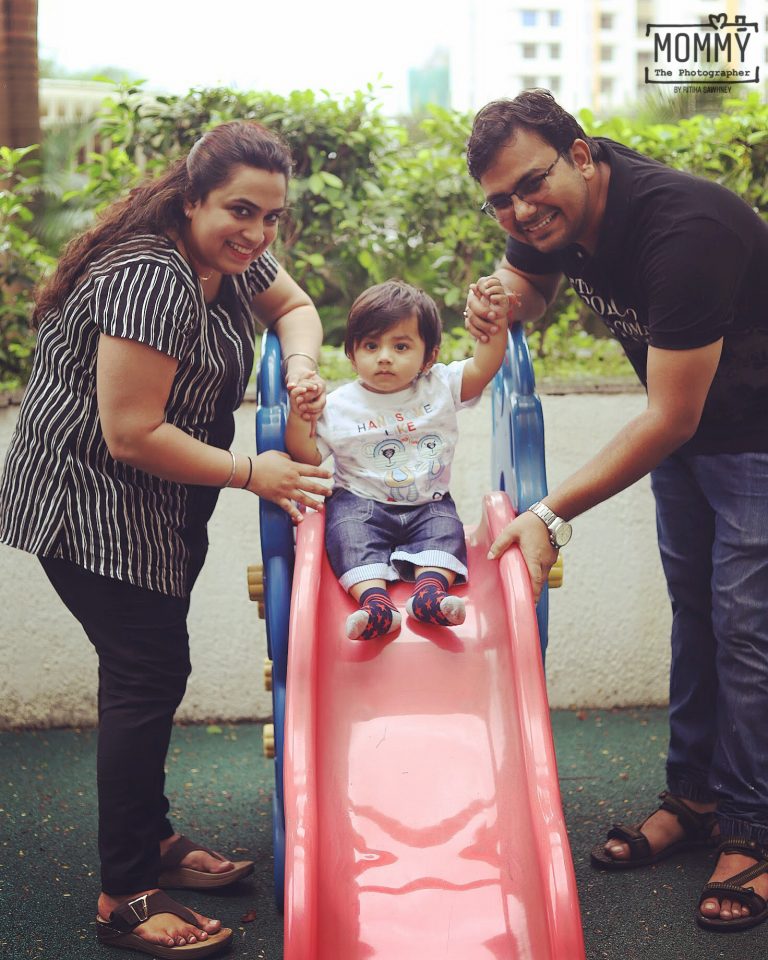 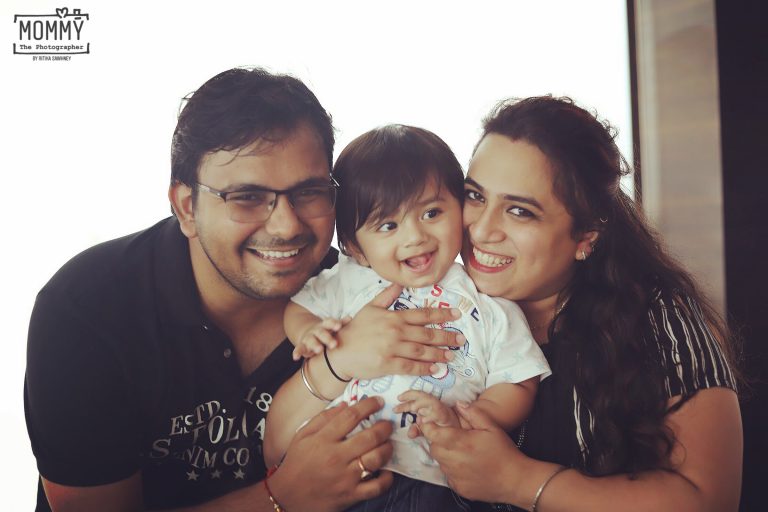 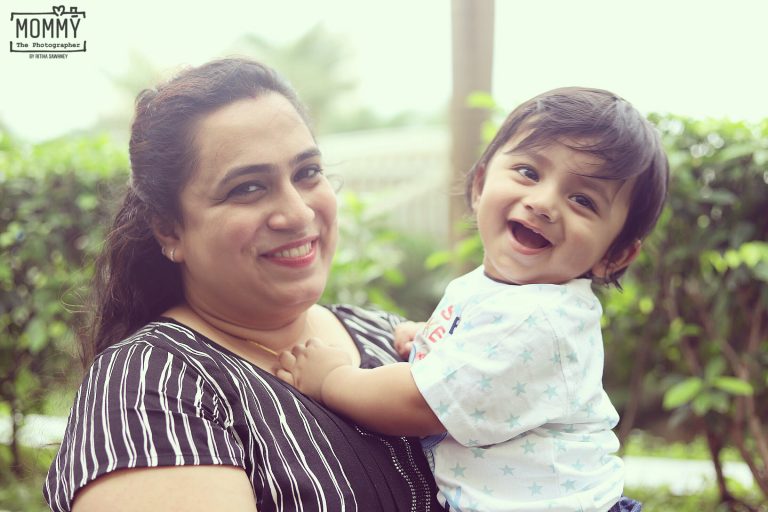 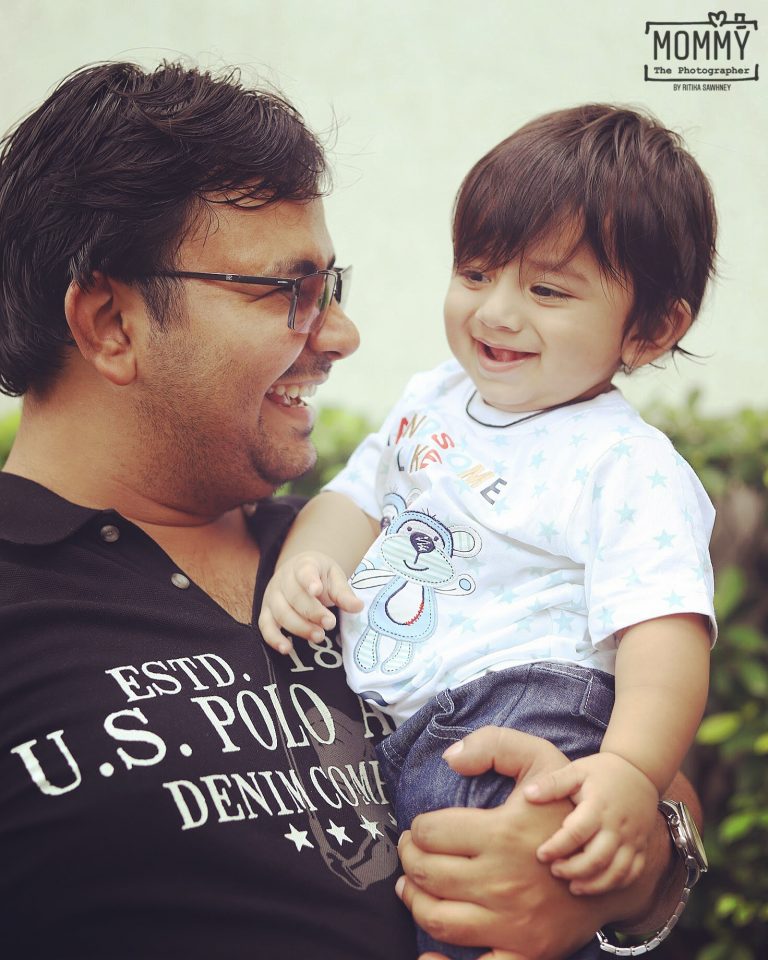 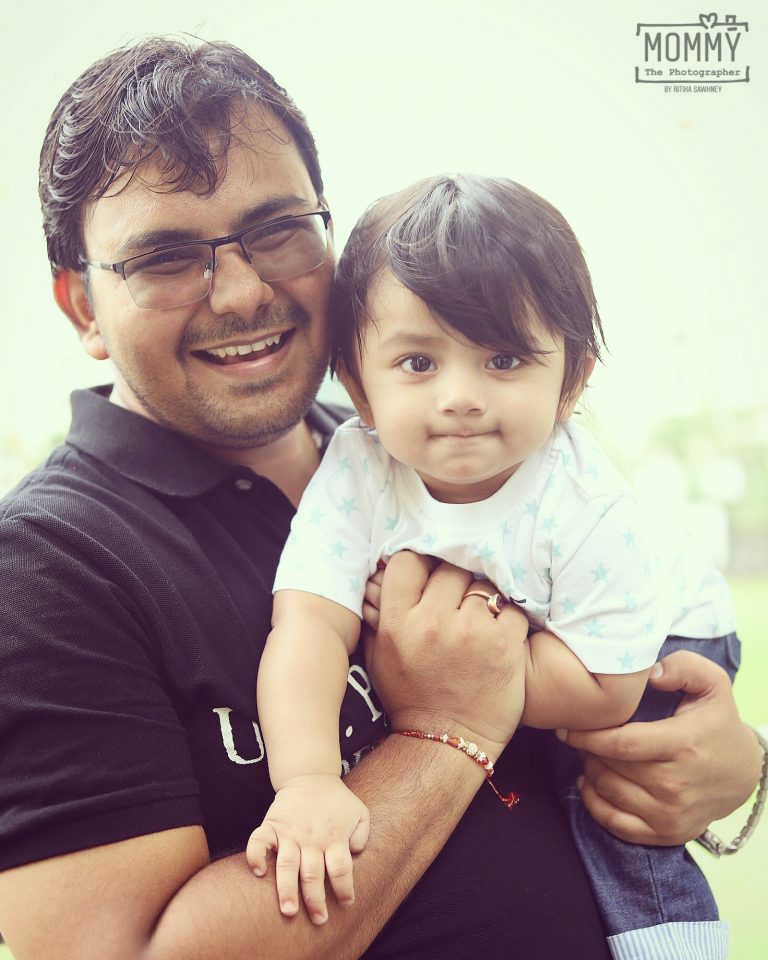 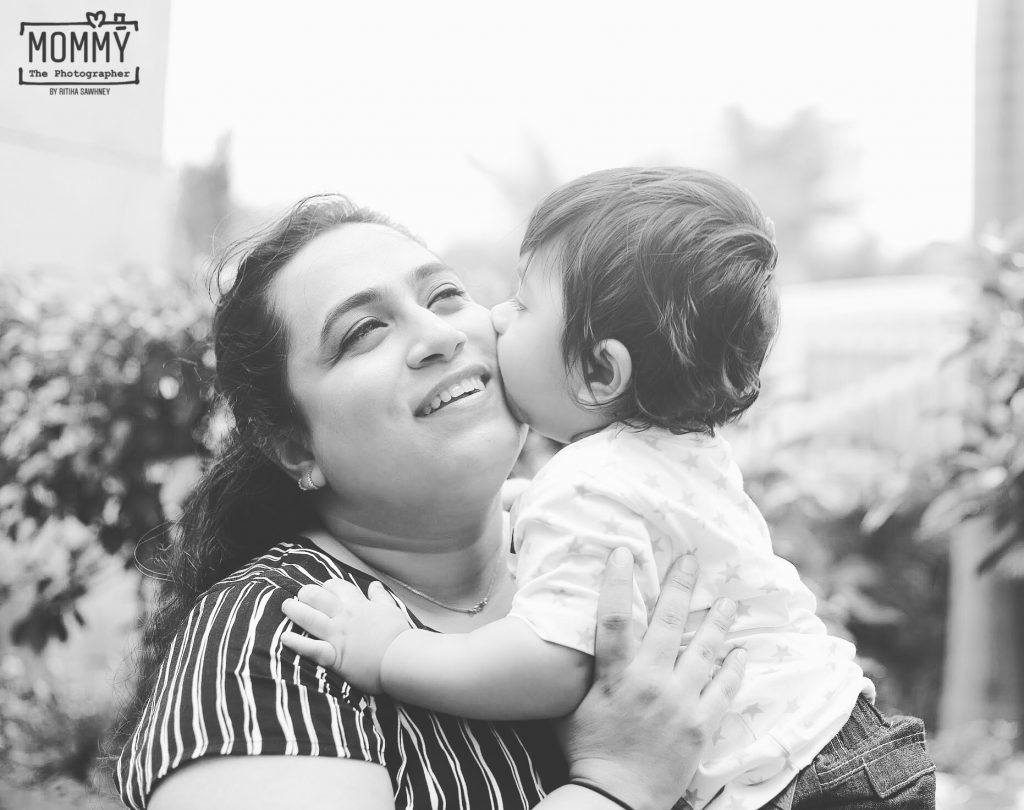 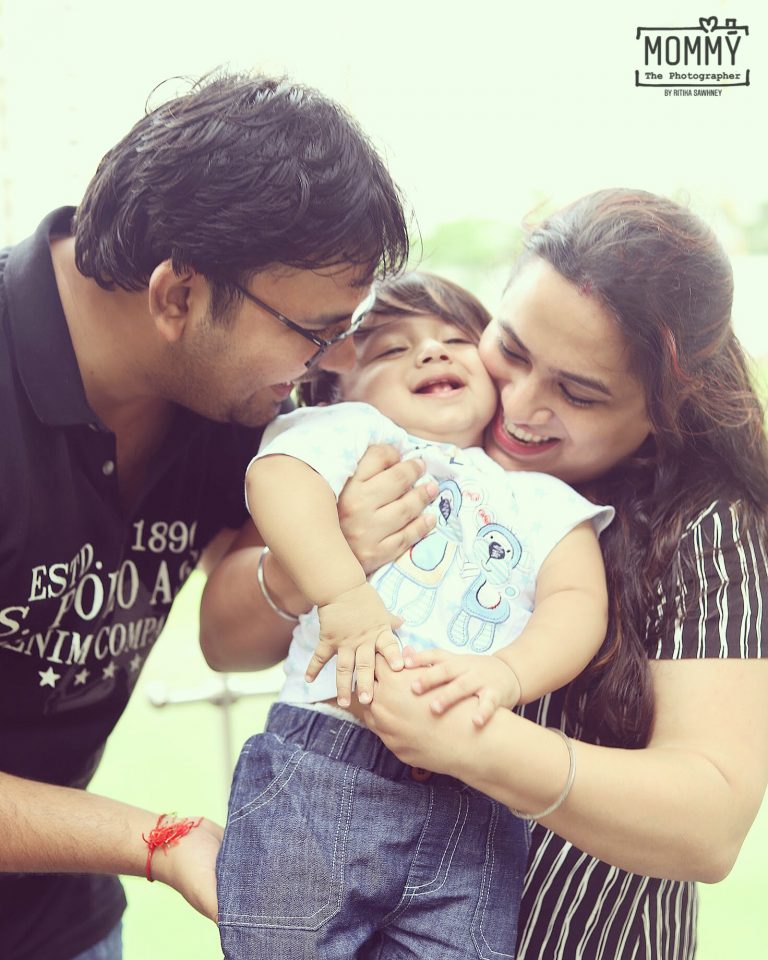